Lake George is known for its purity world wide. It is an oligotrophic lake, which means it should not be a water body which supports and produces plant and algae growth. Over the past decades, residents and scientists have noted increasing algae growth in our water, with the  concern that this AA-rated lake could begin to generate toxic blue green algaes, otherwise known as Harmful Algal Blooms (HABs).
The first HAB (top, upper photo) developed 11/9/2020.  A very similar appearing HAB (top, lower photo) appeared 11/11/2021.

​
The most recent Harmful Algal Bloom (HAB) in the shallow end of Harris Bay was noted Nov. 11,2021.  It's appearance and timing mirror last year's HAB of Nov. 9, 2020. These recent blooms have  heightened the mission of the Assembly Point Water Quality Coalition to safeguard our lake water.

​Harmful Algal Blooms (HABs) consist of clusters of blue-green algae , also known as cyanobacteria.  Many types of algae are naturally occurring parts of healthy lake ecosystems and cyanobacteria are naturally present in low numbers. Certain conditions are known to affect the growth of algae, such as nutrient level, temperature, sunlight and wind conditions.   When all these factors come together in combination to foster a surge in growth, the algae can  rapidly increase in number and form “blooms” that are visible on the surface of the water. These blooms can look like green dots, clumps,  or parallel streaks, or like paint or “pea soup” along the shoreline. The stronger the bloom, the greener the lake may look.  Some blooms may take on a purple or reddish color.  The danger of a HAB is that certain strains of the algae, or cyanobacteria produce toxins called cyanotoxins, which can be harmful to humans and pets.  Consuming tainted drinking water or fish, or swimming in waters with significant levels of cyanotoxins can cause serious effects on the hepatic, neurological, respiratory and dermatological systems. Fish and other aquatic life are harmed as well.

New York State Federation of Lakes Association (NYSFOLA), NYS Department of Environmental Conservation (DEC) and Upstate Freshwater Institute are working with lake associations around the state to identify, sample and analyze algae bloom samples. The November 7, 2020 HAB was spotted and reported by a resident. The bloom dissipated later that day, but reappeared 2 days later.  Prompt action was key to identifying the bloom and ascertaining its severity.  The Jefferson Project at Lake George (a collaboration between Rensselaer Polytechnic Institute, IBM Research and The Fund for Lake George) and the DEC responded to the reports.  The NYS DEC announced the presence of a Confirmed Bloom in Harris Bay, with toxin levels below the Environmental Protection Agency’s 10 day drinking water health advisory level.


A Confirmed Bloom is certainly cause for alarm.  Findings of toxins below a level deemed safe for consumption for 10 days does little to reassure year-round and seasonal residents, who depend upon the lake for their drinking water. The possibility, or likelihood of another HAB in our lake water needs our attention.
To be proactive, we can all work to reduce nutrient input to our lake, specifically nitrogen and phosphorus.  Controlling run-off from our property, confirming that septic systems are functioning properly, and not using fertilizer within 50 feet of lake or stream are all key first steps for all lake residents that will make a difference.
We Have to Make a Difference - We have to BE THE DIFFERENCE for Lake George. 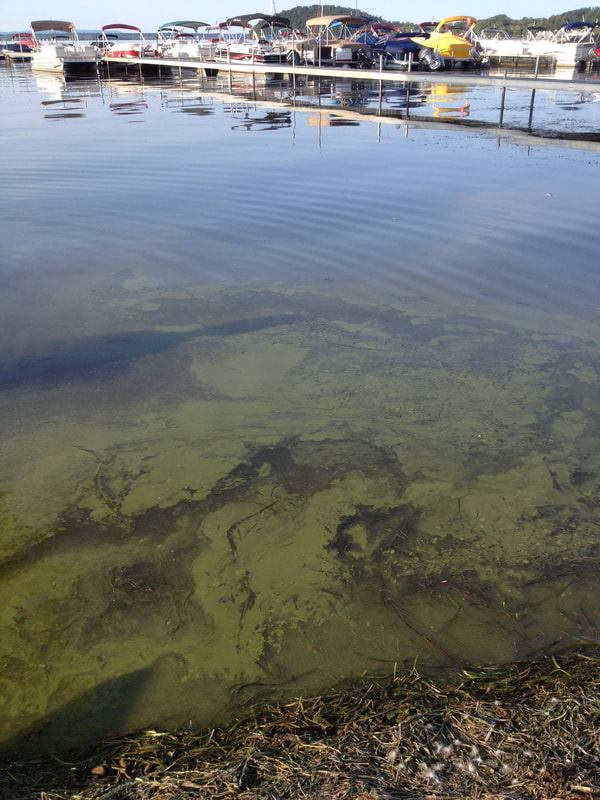 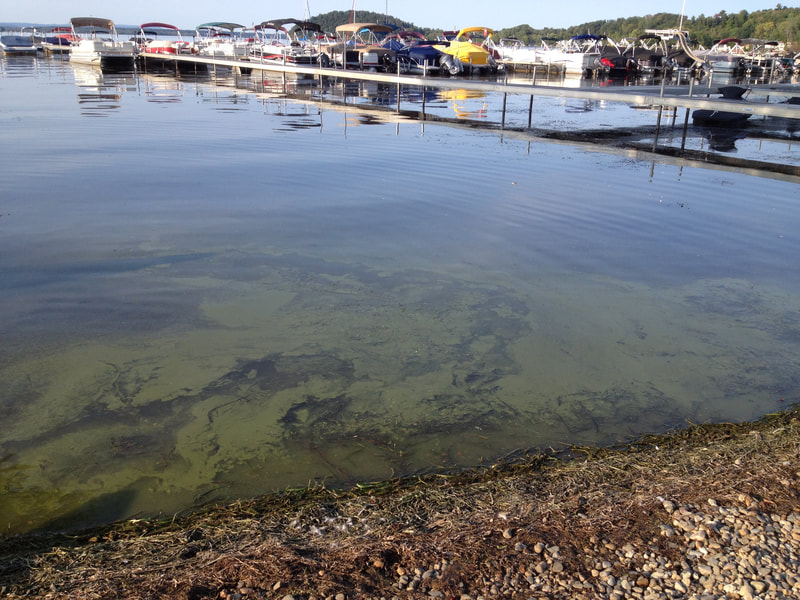 The direct cause of Harmful Algal Blooms has yet to be determined.  Algal Blooms are caused by  Stormwater Runoff, septic pollution and fertilizer use too close to water bodies.  Press the buttons below to view septic and fertilizer pages
Septic Issues around Lake George
Fertilizer Use adjacent to the Lake